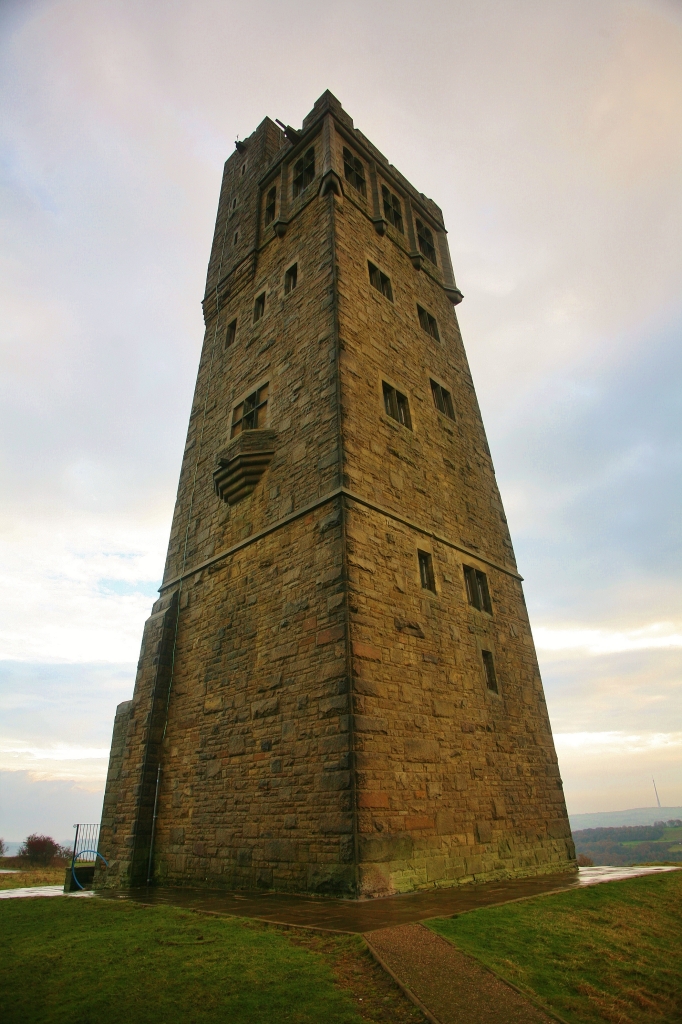 Castle Hill is Huddersfield’s iconic landmark and can be seen for miles.

Up on Castle Hill itself, the views stretch for miles too in all directions – towards Leeds, Manchester, Holmfirth and Wakefield. Archaeological digs show that the area was occupied 4,000 years ago, and since then there is archaeological evidence of the Iron Age, and the Romans who settled at Castle Hill thanks to its strategic location with the rivers Colne and Holme nearby.  After the Romans, came the Saxons and with them settled peace in the region.

Huddersfield was a Saxon market town, and its name probably came from the meaning ‘the field belong to Hather or Huther.’  In the Domesday Book the name of Oderesfelt is cited, and this has evolved over the years to Huddersfield.

With the surrounding sheep country and the ready availability of water Huddersfield became a textile town before the industrial revolution, noted for its fine woollen worsted cloth. Mechanisation brought growth, and great wealth for some, and the town gained its canal system and the railway to transport goods. The canal system has been renovated, and the highest, longest (3 miles 135 yards) and deepest canal tunnel in the country, Standedge, is a major attraction. There are walks, pubs and restaurants elsewhere along the canals, taking advantage of the magical draw of the waterside. The Huddersfield Narrow Canal stretches the length of the Colne Valley through quaint villages of Slaithwaite and Marsden, with their arts and crafts shops and artisan beer, bakeries and cafes.

The railway station in Huddersfield is a magnificent piece of Victoriana, once dubbed ‘A stately home with trains in’. Outside the station there is now a bronze of one of Huddersfield’s most famous sons, Prime Minister Harold Wilson. There are a lot more architectural splendours to enjoy in the town, which has the third highest number of listed buildings of any town or city in the country. An example is the characterful charm of Byram Arcade.

There is something for everything in the area – sport and the great outdoors, shopping and relaxation, heritage trails, and things to do with the whole family.